We also believe employees want to take control of their work-related social sharing — allowing them to share what they want, the way they want it, and letting businesses measure the results of company-related content.

Today we’re opening the doors to Addvocate. It’s incredibly gratifying to have been able to build this little idea of employee advocacy and coordination into a reality.

First off, thank you.
To all of those who have cheered us on, provided feedback, and backed us financially. Building Addvocate could not have happened without you support.
Nearly four years ago I was the Director of Social Media at Salesforce.com. At that time I was struggling to navigate 3,200 employees, many of which were engaging on social with our customers and prospects – but I couldn’t track all of them across the various social channels.
I thought if I could discover who they were, maybe then I could report on whether they were doing a good job or not – Wouldn’t it be great to validate their efforts with some sort of metrics?
Let’s just say I could track them all (without being a total creeper), and then let’s also say I could create reports to tell coworkers how well they’re doing — how could you empower that workforce at a time the company needs them to amplify a message?
Well, these are some of the problems we’re working to solve at Addvocate. We want to make it easy to organize, measure, and activate an entire workforce.
Social tools for the rest of your company!
Before we get crazy here, let me be honest for a moment. Addvocate is not done. It’s still in beta — In fact, we’re going to call it a, “paid beta.”
Why is that? Well, we believe if someone really needs a product like Addvocate, they’d be willing to support it. By charging something, we immediately create a barrier to those who, “kick the tires” and zap our precious resources.
By creating a cost, we believe it’s going to spur better, more beneficial feedback. So for the next 30 days we’re going to run a little experiment.
Pick-What-You-Pay 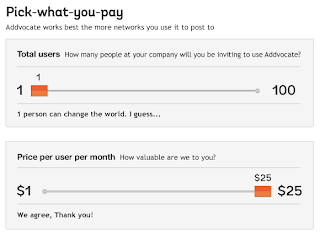 We are going to let customers pick the price they want to pay per user.
Addvocate will honor that price for the next 6 months.

On top of that, the customer only has to pay for the first license, which covers their own account. After that, invite up to 100 employees at no additional cost for the next 30 days. After that, only pay for the employees who accept their invitations.

For example, if someone picked $12 per user per month, that person would pay $12 today to sign up (their own license).

Now that same person invites 50 employees, but only 24 accept their invitations.
After 30 days, the monthly subscription would be $300 for the 24 coworkers + the original person who created the account. But it gets even better…

At the end of the account setup, there’s a referral code. If that code is sent out, the account will get one free month of service for each additional company that uses their referral code to sign up (maximum 6 months).

So this is it. We’re marching forward. Let’s see what this puppy can do.
Please sign up, try Addvocate out and tell us what you think.

We definitely want to hear from you.

So on behalf of our entire team, thank you. 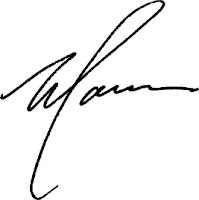