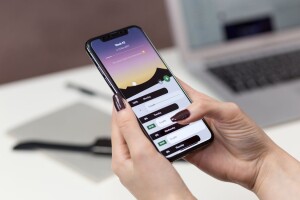 Let’s say that you’re no longer satisfied with your smartphone. Maybe you’ve had it for a long time, or perhaps you see that the newest one has some features that you love. The time has come for a new phone, but you’re not sure how to start the process.

We’ll go through the steps of getting a new smartphone right now. It’s not that difficult, and you’ll be glad you have the latest model with the features you want.

Reading Through the Contract

The first thing you’ll want to do is to look at some of the cellular service providers that are out there. You might want to look at ones like Verizon, T-Mobile, or AT&T. Those are the top three in the US.

You also could decide that you want a cheaper one. If so, you might look at Mint Mobile or Consumer Cellular. Consumer Cellular markets itself toward an older crowd, but there’s no reason you can’t use it if you don’t need a ton of data every month.

When you’ve narrowed down the providers to a couple that seem suitable, look at the contract details very carefully before you sign anything. With some providers, you get certain features, while you may not get others, like unlimited texting and talking during a designated period.

Some contracts have obscure clauses that you don’t want to gloss over, or they can come back to bite you later. You might have to pay a penalty without realizing you did anything wrong.

It’s like the New York driver who gets in an accident that causes more than $1,000 in damages. If that happens, you have to file a car accident report. A smartphone contract can be the same way: they might have fine print in them that can cost you some big money if you never noticed all of the rules or you glossed over them.

Selling Your Current Phone or Trading It In

If you’re going with a new cellular provider, you might be able to trade in your current smartphone and get a brand-new one through them. Many providers are eager for your business, so they’ll give you the latest phone if you commit to them for multiple years.

Before you trade in your old phone, though, make sure that you wipe it clean. You don’t want to leave any of your contact information on there, or your credit card numbers, private photos, or anything of that nature.

Make sure you back up your current phone before you wipe it. You do not want to lose any of your data. If you use a cloud backup system, you won’t have to worry about losing anything valuable or irreplaceable.

What if You Want to Keep Your Current Phone?

Maybe you still like your old smartphone, but it’s your provider that you want to change. If so, you can do that as well. You can approach a new provider and tell them that you have a phone already and that all you want is their service.

As a new customer, there are probably deals of which you can take advantage. For instance, some providers will offer Netflix or Disney+ subscriptions on top of unlimited talk and text. To get something like that, though, you might need to go for a family plan.

If you don’t have family members that want to switch providers, you might approach some friends and see if they want to do it. The perks are so tempting that you may be able to convince some of your social circle to switch providers with you.

What New Phone Should You Get?

If you do decide that you want a new phone as well as a new provider, you might choose one that’s Android-capable, or you might go for an iPhone. Some people think that Android is a kind of smartphone, but that’s not actually the case. Android is an operating system you can run on several different phones, including various popular Samsung models.

iPhones often cost more, but that’s because most people like them so much. They enjoy widespread popularity, in part because of features like Siri and their excellent cameras, but also because of their top-notch security. It’s almost impossible to hack an iPhone, which is why you’ll never need antivirus software on yours.

Some people decide to “jailbreak” a phone so that they get iPhone apps on an Android or vice versa. You should never do that, though. Jailbreaking a smartphone makes it much easier for malicious apps to steal your data.

You might decide on the new phone you want, and you’re targeting a particular cellular provider because of the price or perks. You should probably avoid signing a long-term contract. You want to be free to jump to a different provider if your new one doesn’t work out.

These days, since cellular providers realize that their customers don’t like a long-term commitment, they might not force you to sign a contract at all. They might allow you to do a month-by-month deal.

You’ll probably feel better about that since you can go to a different provider at a moment’s notice. The only issue is that if you don’t commit, that provider will probably not offer you the same tempting perks you could otherwise get.

Since 5G is out now, you can get faster streaming service than ever before, and you can text and talk to your heart’s content, provided that you have the money to pay for it. If you don’t have as much money, you’ll probably have to rein in your phone use a little.

Many people don’t even bother having landlines anymore since they always have their phones with them anyway. As you’re considering which phone and provider seem right for you, look at the money you have to spend, what gadgets you need, and which ones you feel are extraneous. That should help you figure out the ideal phone and provider for the foreseeable future.