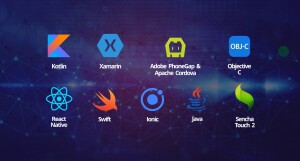 Have you ever thought about why choosing the right technology stack is essential for the success of your future mobile app. First things first, it can help you future-proof your software. Secondly, it can support your business growth. And thirdly, it can reduce development costs. Your choice depends on the approach as you go, be it the native, hybrid, cross platform web and mobile development. In today’s article, we’re going to review the most widely used tech stacks for Android and iOS mobile development.

Native development implies creating an application for a specific device platform either iOS or Android.

There are a couple of languages most developers give preference to when it comes to developing Android apps. They are Java and Kotlin.

Java is the most popular programming language tons of developers opt for their projects. It allows quickly creating robust and stable mobile solutions. What’s more, currently, there are many programmers well-versed in Java coding, which allows reducing time spent on scouting out and hiring relevant specialists.

Kotlin is another option worth considering, though. Now it’s gaining in popularity and remains Google’s preferred language when it comes to developing Android solutions. If you’re starting a new project, you would be well-advised to pick Kotlin, since code written in Kotlin often means much less code to type, test, and maintain.

Considering your toolkit, you’ll need to avail yourself of Android developer tools and Android Studio, of course. The Android software developer kit comprises APIs, libraries, and handset emulators. It also comes bundled with powerful debuggers and sample projects whose source code can be utilized for creating your own projects. Android Studio is an official IDE, which can be an excellent source of plugins, built-in templates, and lots of other useful things for the application you aim to put together.

Should you require a reliable programming language for iOS solutions, consider using Swift or Objective C.

Objective C is a strict superset of C language which can go a long way towards helping you maintain your existing project. As for Swift, it was originally created as a replacement for C-based languages. It can be considered a faster and more efficient alternative to its Objective C counterpart.

When it comes to picking software development toolkits for iOS development, we recommend that you set your sights on Intellij AppCode and Apple Xcode. And don’t forget about the iOS SDK, a software development kit consisting of the Xcode IDE, compilers, iPhone simulator, instruments, frameworks, APIs, and many more.

As their name suggests, hybrid apps represent a blend of both native and web solutions. Essentially, they function as websites, but run from within a native application and its embedded browser. Your tech stack here can include standard web techniques like HTML, JavaScript, or CSS. Another essential component will be programming frameworks Ionic, and Apache Cordova. Cordova is commonly known as PhoneGap. The framework embeds codes into a special native wrapper that can access a device’s functions. This allows creating a native shell app.

Ionic is an open-source SDK created for building cross-platform apps. It simply integrates with simple front-end frameworks including Angular, Vue, JavaScript, and React so that your team can have the pleasure of choosing between their favorites.

Note that hybrid apps created with Ionic or Cordova are capable of doing anything a traditional native app can do.

Cross-platform app development is a process of creating software applications that have a potential of running on multiple mobile platforms. There are several cross-platform tech stack options you can familiarize yourself with right now.

React Native, which is a JavaScript framework created by Facebook for developing natively rendered mobile applications for iOS, Android, and web. Using the given framework ensures a more time-efficient and high performance development process. React is considered the most effective option because of a broader approval and mature presence in the market, which is very important in the software development realm.

Xamarine is an open-source platform that relies on C Sharp and .Net framework to compile a native code into different mobile binaries. Xamarine is a great alternative to Native. Another reason to opt for Xamarine is that it allows sharing more than 96 percent of written code across various platforms, which is very convenient for developers.

Flutter is Google’s UI software development kit. It contains fully customizable sets of widgets and provides full native performance. App development with the given kit is rightly regarded as speedy and robust.

As you see, your choice of technology stack is largely predetermined by the type of a mobile application you’re going to craft. To succeed in your development endeavors, experts highly recommend that you analyze industry-specific requirements, hire a team of experienced professionals, and clearly communicate your ideas and vision of your future app to them prior to diving into the development process.