Disappearing Displays: Can You See Me Now? 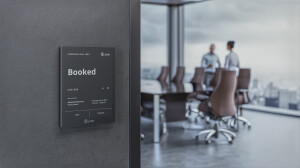 For those of us in the tech industry, inventions from the iconic Star Wars saga and Star Trek series have led to decades of inspiration – some of which we are still trying to build today. Even over the last few years, I have been thrilled to see many of my colleagues pushing the envelope on next generation digital display technologies. One segment of this industry I see opportunities for innovation is what I call “disappearing” displays – displays that don’t get in the way when they aren’t being viewed, so to speak. Sort of like the character Jeeves in P.G. Wodehouse’s popular novels who could appear and disappear at will.

Let me give you a little bit more context around this. Have you noticed people turning towards their Alexa/Google Assistant devices to ask a question? Or noticed people in a conference room on an audio call, staring at the phone while speaking? How about in the car where people turn to the GPS display while speaking on their hands-free phone? Why is this? Humans are visual creatures. But we also want to see displays when we need them; the rest of the time we would prefer for them to be out of the way, merged with the background, virtually disappearing until we need them again.

When CRTs were replaced with flat panel LCD TV’s we reclaimed substantial floor space in our living rooms, conference rooms and hotel rooms. But TVs moved from the floor to the wall, while they are thinner, the monstrous mounting brackets and swiveling arms cause these ugly beasts to jut out. If you have bumped into the TV while navigating around the conference room table or into the massive TV larger than your bed in your hotel room, you know what I am talking about. We love those screens, but they are in the way, they are inconvenient after we are done with our video call or movie. They gotta go, they ought to get out of the way.

Sometimes all you want is the screen to stop flickering, dim down, disappear into the background when you no longer need it. They don’t need to physically disappear in all instances.

Disappearing displays already exist, we don’t think of them that way, until today. I came up with four buckets to put them in. Let’s review them and then I will get into more futuristic stuff.

- Physically Disappearing Displays: These include old style TV’s inside a cabinet where you can shut the doors to make them “hidden,” to the more recent LG TV that retracts into its base, or even projector screens that can retract to the ceiling. These displays physically disappear or remain hidden when they aren’t being used.

- Shrinking Displays: These are displays that can be folded or rolled or otherwise shrunk from their original size to something smaller in the X-Y dimension so they are less obtrusive after use. One example is a foldable phone or foldable laptop/tablet. (These are obviously not like your old school flip phones).

- Quiet Displays: Here, the display does not physically retract or shrink; it just goes into a quiet mode. When not in use they are about as distracting as a piece of printed paper. A good example is Joan, which includes an ePaper display that doesn’t flicker or distract like its LCD counterparts when not in use, and uses 99% less energy as well.

- Metaphoric Displays: The users lose themselves in the display such as with an Amazon Kindle where you no longer “see” the display when you are engrossed in reading. As then Amazon CEO Jeff Bezos described it, the top design goal for the Kindle device was “to disappear in your hands – to get out of the way – so you can enjoy your reading.” Another cool example is Samsung’s Wall TV, which just blends into the background.

Some other cool examples of disappearing display technologies include:

- Boogie Board, the pioneering reusable writing tablet using cholesteric liquid crystal technology; the Boogie Board does not go into screensaver mode like a tablet, it does not flicker or distract when you pause your writing. There are also examples of ePaper single-purpose writing tablets that fit this description as well.

- Microsoft’s Surface tabletop becomes the table and could be used to place food dishes when you are done ordering or paying in the restaurant.
The world’s thinnest watch is an example of a shrinking display

- Kuori Oy’sYeti Tablet causes both the display and technology to disappear for senior citizens and kids with learning disabilities
Electronic shelf tags that look like printed labels, don’t look out of place like a monitor or TV in the grocery store, they ‘disappear’ into the shelf

And don’t ask me ‘how ‘bout them scrolls?”, those disappeared long before any electronic display was invented. So fuhgeddaboudit, that is ancient history.

Now, without sounding too out-of-this-world, I’d like to take a dive into where I see disappearing display technology going in the not-too-distant future.

- Transparent displays to replace building and shop windows or a car’s sunroof. These displays will have sparse transistors, on a very thin sheet of plastic-like film, powering Mini or MicroLED. SmartKem is already making such a film using Organic Thin Film Transistors (OTFT). For example, your “TV” becomes transparent – when you are finished watching a movie, the screen becomes your window, the display disappears. In other words, you can see through the display. Also, think of your car’s roof as a screen. Imagine if I parked my car and pushed a button and my seat reclined and the roof became a screen. We could literally build such a prototype today. Just look at whatNBC’s studio did during the Beijing 2022 Games using MiniLED displays, they brought the ski slopes into their studio.

- AR glasses. Imagine wearing a pair of glasses that have the ability to collect and display data that can, for example, alert you that a colleague is walking into the room and inform you that you owe her money from a Super Bowl bet. The display disappears into the glasses and does not impair your vision like, let’s’ say, VR glasses. eMagin is already building 10,000 cd/m2 bright OLED Microdisplays that disappear into AR glasses.

- Large color changing ePaper displays. Have you seen BMW’s color-changing car wrapped in ePaper? Imagine using this E Ink display technology on military aircraft that disappear into the sky. The possibilities are endless.

– NFTs and artwork disappearing displays: Ok, you paid an insane amount of money to purchase a NFT. How will you show it off? What if you had a display that “disappears” into the wall as art? Check out what Canvia is doing and you’ll get the ‘picture’. Omniply is making sticker electronics that might allow you to peel off the display and stick it elsewhere.

- Digital “bricks”: In the future I see more buildings with blocks of displays on the facade rather than traditional bricks that might resemble this outdoor LED display on the Gold House. X Display Corp could enable this inside the building.

- Holographic display: Let’s go back to Star Wars for a minute, where holograms were a hallmark, including the famous scene where R2D2 projects Princess Leia, who pleads, “Help me Obi-Wan Kenobi, you’re my only hope.” Now envision holographic displays that project 3D images that could have useful application in several industries, such as healthcare, entertainment and auto. Looking Glass Factory is already headed in that direction with 3D Holographic displays.

Do some of these ideas sound a bit far-fetched? If so, that’s the point. Wild ideas often lead to breakthrough innovations. As George Lucas said, “Dreams are extremely important. You can’t do it unless you imagine it.” Or, if you’re more of a Star Trek fan, creator Gene Roddenberry said it best: “It isn’t all over; everything has not been invented; the human adventure is just beginning.”

I expect customers to demand “disappearing displays” as a feature in most applications where the display is not ON all the time. I love electronic displays of every kind but they gotta disappear when we are done viewing them. See if you can discover new disappearing displays at SID’s DisplayWeek 2022 in Silicon Valley during the month of May.

Sri Peruvemba is CEO of Marketer International Inc. in California. He has also served on the Executive Board and was former Chair of Marketing for many years for the Society for Information Display (SID’s Display Week 2022 will be held in San Jose, CA, May 8-13, 2022). With over 30 years of experience in the technology industry, Peruvemba has been an influential advocate in the advancement of electronic hardware technologies. He is an acknowledged expert on sensors, electronic displays, haptics, touch screens, electronic materials, and related technologies; and consults, writes, and presents on those subjects globally. Contact Mr. Peruvemba at sri@miinc.co.