Video Technologies that have found Their Way on the Internet 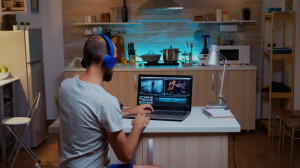 Video is the media of the day, and it should remain so for a long time to come. Of course, it will be evolving, especially since it is being used so much on the internet, in many different ways. Why is video so popular and what are the forms it has taken today? Here is a closer look at the situation.

Most people may not know this, buy YouTube is the number one social media, when it comes to advertising. That in itself explains quite clearly the power of video over other media. Although Instagram, TikTok and Facebook have all made space for users videos, there is no doubt that they aren’t the first applications you think of, when the word video is mentioned. YouTube is the king in the field, and they are making the money to prove it.

But everyone is using videos online, to attract their consumers. And today, you have to be more original than ever to catch their eyes, or use cool technology, such as a time lapse 360 camera. They let you create amazing videos that capture days of developments and brings it to viewers in a video that lasts only a few minutes. There are no videos online that can create as much fascination to viewers than ones created with a time lapse camera.

First, there was 3D, then there was VR and now we have AR. These are all technologies that are radically changing the world of video. Forty years ago, to watch 3D, you needed to have the weird-looking red and blue cardboard glasses on. We are a long way from that today, with Virtual Reality. Once you put on the goggles, you are literally brought into another world, which looks and feels as real as the one you live in. It uses various techniques to add to the video part of it, but you are literally plunged into a video, that is created to make you feel like you are somewhere else.

With augmented reality, you can actually see things that exist only when you look through an application. You could be watching a video on TV or on the internet, and see a regular image, but when you pass your smartphone in front of the screen, while using the AR app, you will then discover something else. It could be text, an image or even another video. That is how far video based technologies have come, today.

We could not write an article about video on the internet without mentioning videoconferences. They exist for a long time now, thanks to Skype. But their popularity exploded during the pandemic, as people were locked inside their home. It became the only way to talk to friends, families and colleagues, while seeing them. Zoom became the program you needed to use, overcoming Skype in a matter of months. Now, most social media have their own video-conference inside their program, so that people can talk to each other through video, instead of just voice.